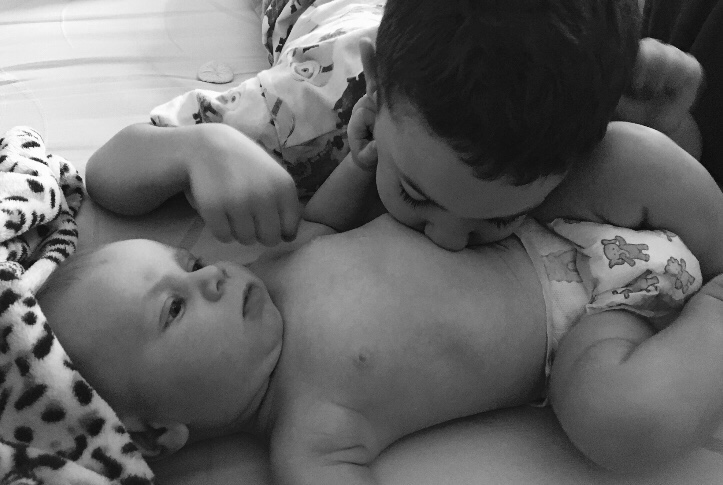 One of my biggest worries when we found out we were expecting was how to break it to my step-son. He was five, and had been the only child in the family for the first 4 years of his life (and didn’t particularly relish having a younger cousin) so we had our work cut out.

We wanted to wait until we were over the 12 week mark, as although we had told close friends and family already, we felt that should anything go wrong we didn’t want a child to have to try to comprehend it – so by the time we broke the news I was 14 weeks along.

We sat him down between us and said we had something very exciting to tell him. This laid the foundation for him to anticipate exciting news, so he was already in the mindset that something good was coming! We told him that he was going to be a big brother! He was quiet for a moment and then suddenly a small smile appeared and it slowly grew wider and wider.

I explained that I had a baby growing in my tummy and that this baby would be his little sibling. He seemed excited at the prospect of being a big brother, and seemed to grow with the anticipation of the responsibility that entailed. Once we found out we were having a boy he started telling us how he will be able to show him how to play with cars and dinosaurs and teach him footy. As far as he was concerned this baby was relying on him to teach him the ways of a little boy.

Because we had gone about telling him the way we had, I think he felt he was gaining something important in his life and so he was excited about it. I definitely feel that if we had said we were having a baby instead of the fact that he was becoming a big brother, it would have made him feel like his life as it was was being intruded upon by this un-asked-for baby, but instead he was becoming something special – a big brother.

We would look at baby books together and he would rub my belly and say good morning and goodnight to his baby brother. He got to feel him kick and he would talk to him and tell him about his day and his toys and what we were going to have for supper. The bond between them was growing right from the start.

You can see the love between them – the air of protection that the eldest has over his younger brother. It’s a very special bond and one that will be with them for life. It’s so very important to lay down good foundations, to avoid jealously and resentment towards the new baby. Because of this great start my step-son is so very proud to tell people that that’s his little brother.